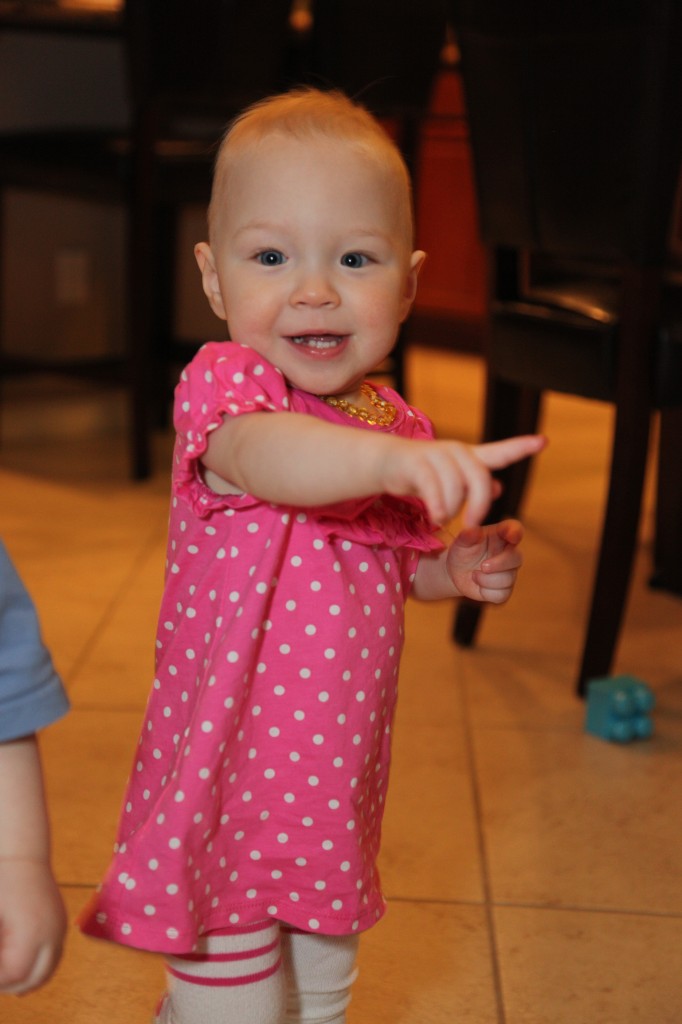 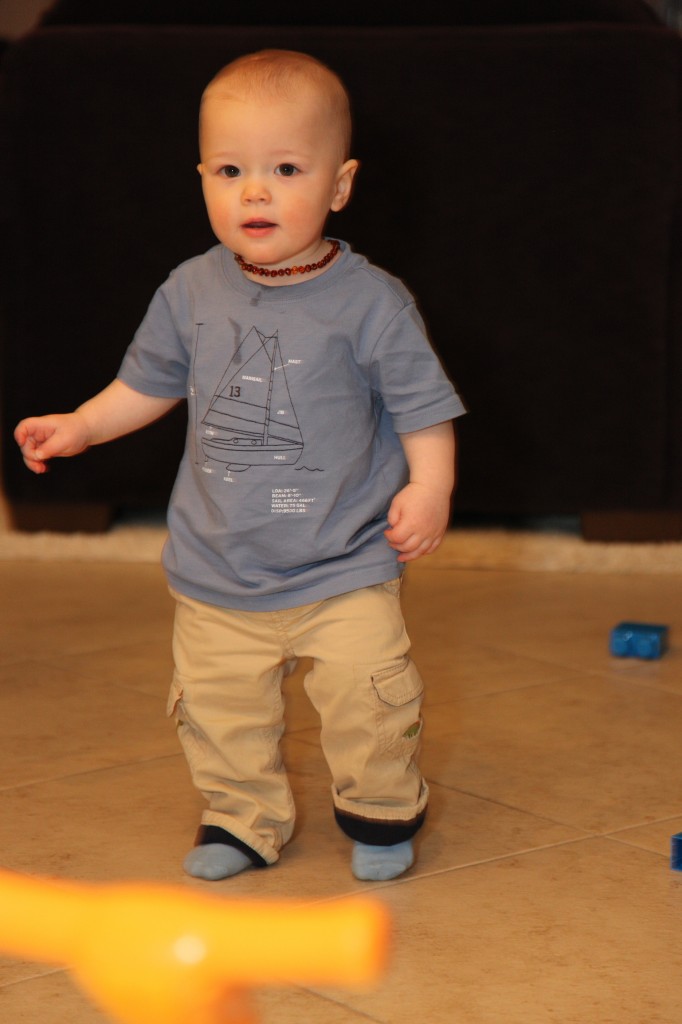 Cameron and Sophia don’t just walk now…they run.  They’re so quick that it’s really tough to get photos of them in the house. Sophia just started cutting her 13th & 14th teeth.  Cameron’s working on 5.  They both now know more sign language than I do and are starting to try more spoken words every day.  In their repertoire is: mama, dada, brobro (brother), sissy, out, ouch, papa (for Grandpa), baba (bottle) and babadadabaabaaa (everything else).  They both get extremely excited when you spell out their names (by pointing to some monogrammed towels they have). 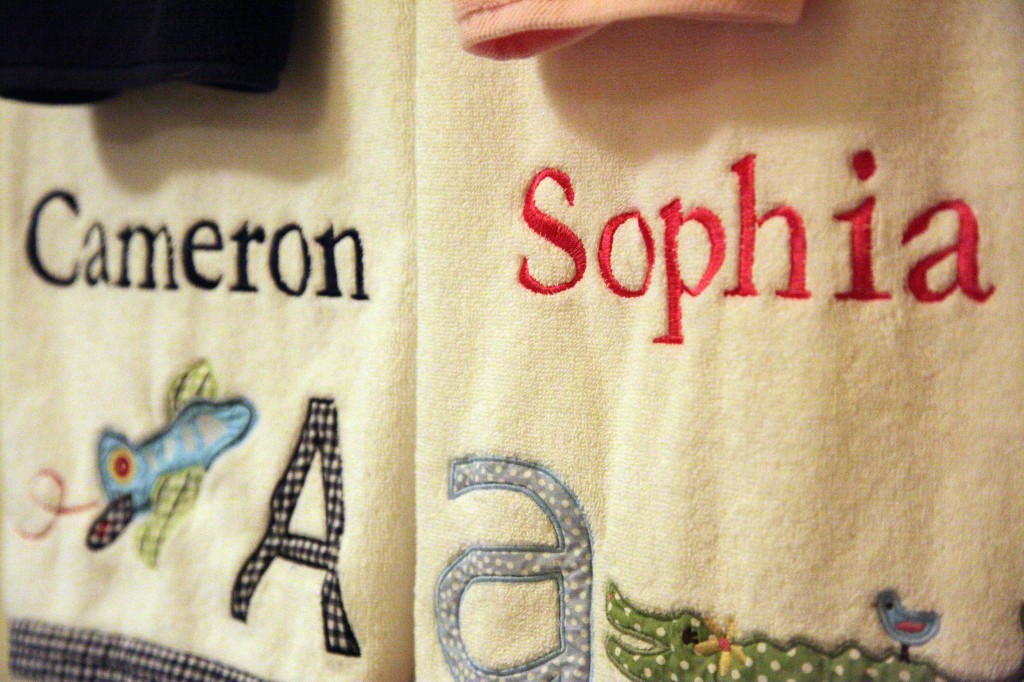 So far, Tanya & I can understand their words.  I’m not sure anyone else can though.

They’re both remarkably good at calling for us by “mama” and “dada” when they want something.  They also mix pointing at things with different sign language signs.  Tonight Cameron pointed at the shower nozzle and gave me the sign for drink.  I don’t exactly know the translation for that, but I’m sure it was brilliant.

They both are trying to count with their fingers.  The most exciting part of counting is when someone gets to 5 and high fives can be shared…followed by clapping and giggling.

They’re definitely all girl and all boy.  Sophia already loves trying on (and showing off) new clothes, hats and sunglasses.  Cameron’s really good at breaking stuff.  They both look up at the sky when a plane flies by. 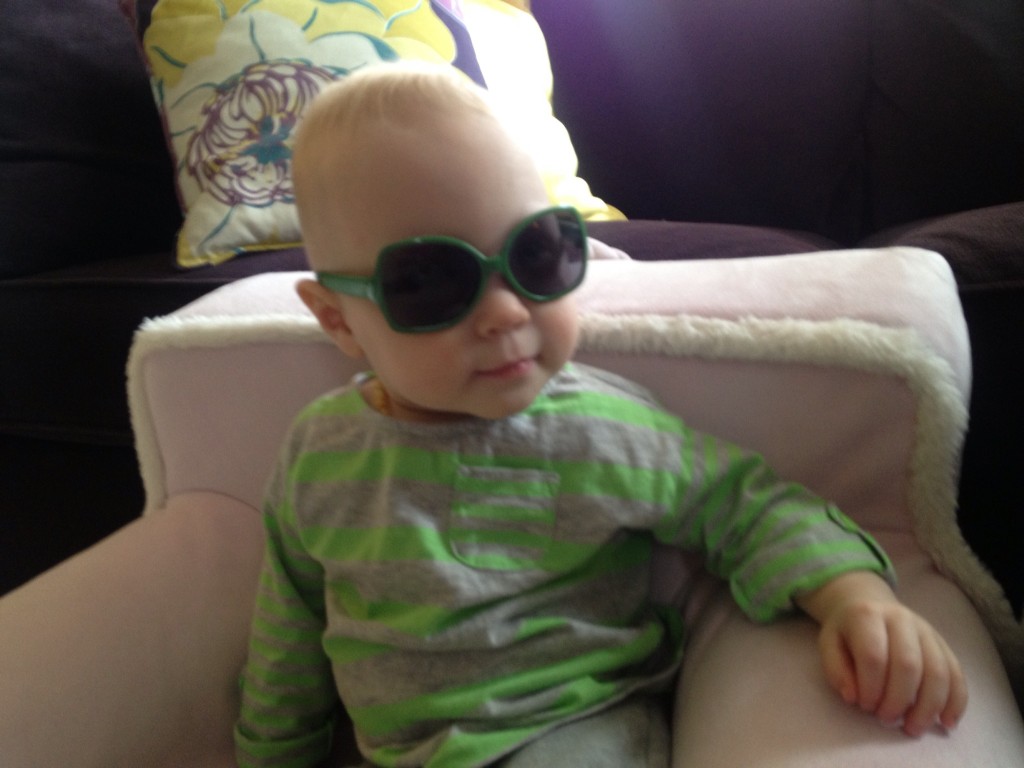 Stacking is a new favorite past time.  They both love building things with their giant Legos.  Their design skills need some work though.  They both love their cars & trucks.  They both can now straddle their push cars, move themselves around the house on them, and steer around obstacles. They’re also getting pretty good at “clean up time” before dinner.

They’re both tall enough that they can hit their heads on the kitchen table.  Climbing stairs is completely mastered – although Sophia prefers to try to walk up them instead of crawl up them (stars are still way too big for them to walk up).  They’re still mastering the art of going down stairs though.

They have a swing set in the back yard that they absolutely love.  The only problem with it is that they hate leaving it.

A few days ago, Tanya introduced them to dipping food in condiments.  Cameron LOVES it.  Sophia’s still trying to figure out why you’d want to ruin perfectly good tater tots with ketchup.  They’re both really good at eating on their own and have done really well recently at a few restaurants, including Famous Dave’s BBQ. 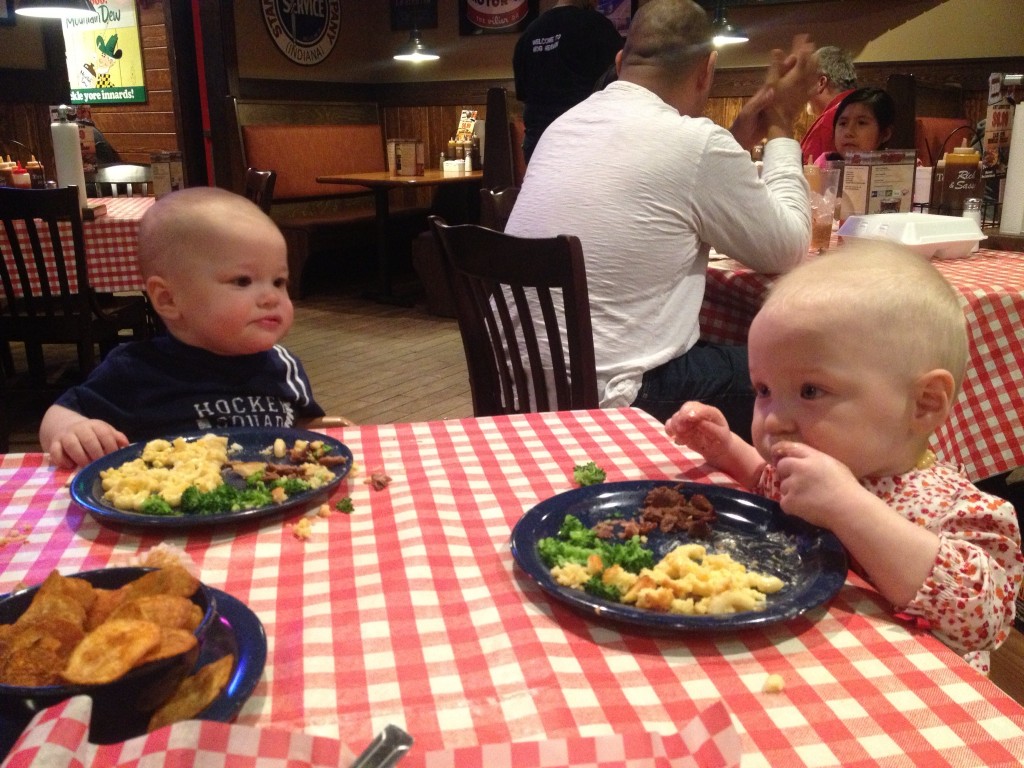 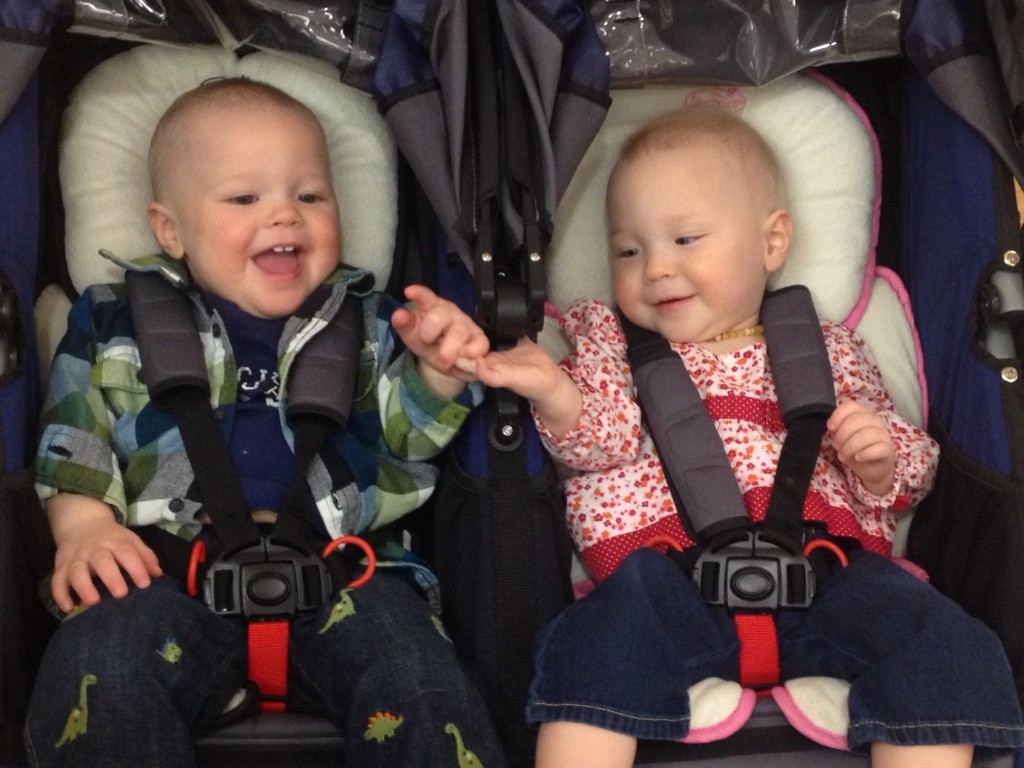 Most nights at least one of them sleeps through the night.  They’re typically sleeping 11-13 hours at night and a single 2-3 hour nap during the day.  We’re not pushing official potty training yet, but Sophia pees or poops on the toilet just about every time we set her on it.  She gives us the sign for toilet, grunts at us, or walks towards the bathroom fairly often when she has to go.  Cameron pees on the toilet fairly regularly, but doesn’t really like to poop on the toilet.

When I get home from work every day, I lay on the floor and the twins climb all over me looking for my belly button or trying to tickle me.  From that, they apparently learned to wrestle each other (usually it’s friendly)…

Their personalities are amazing – and very different.  We’re so completely in love with them we can barely stand it. 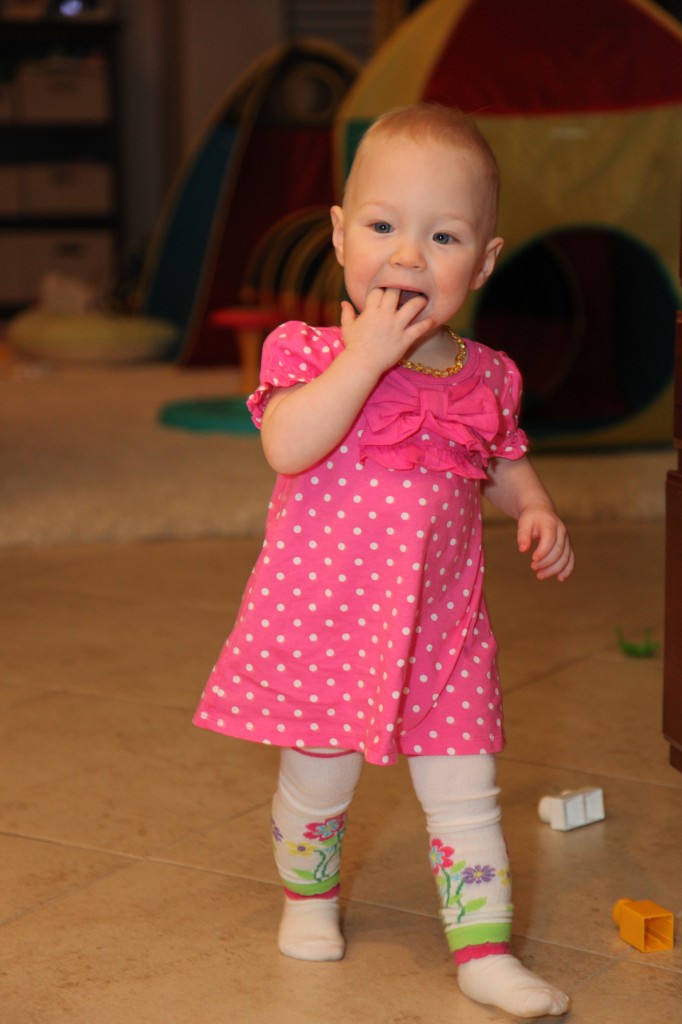 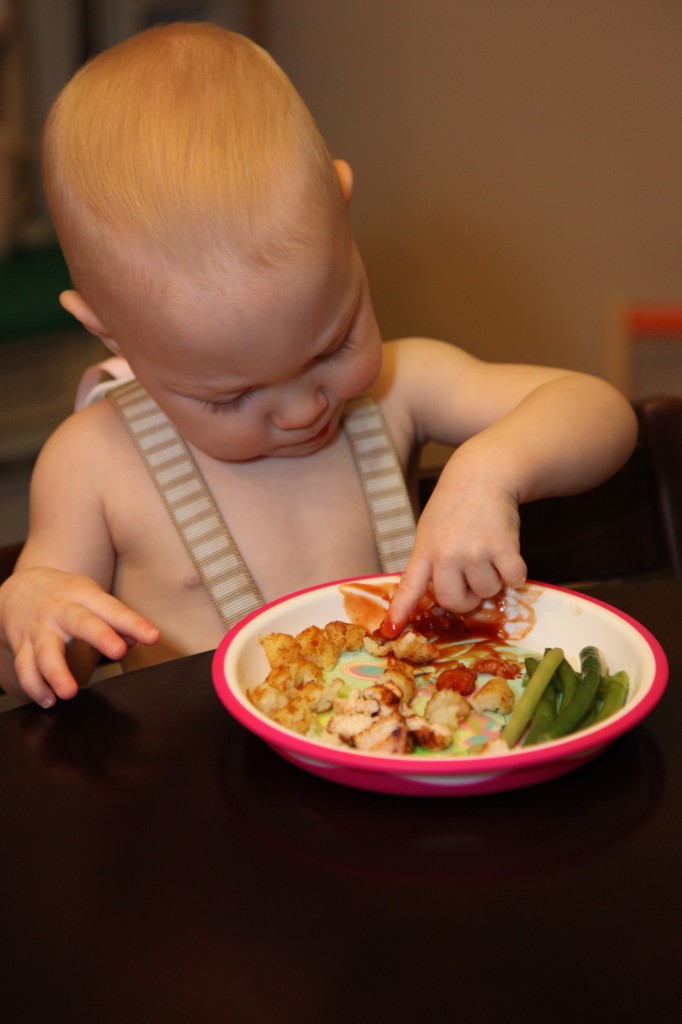 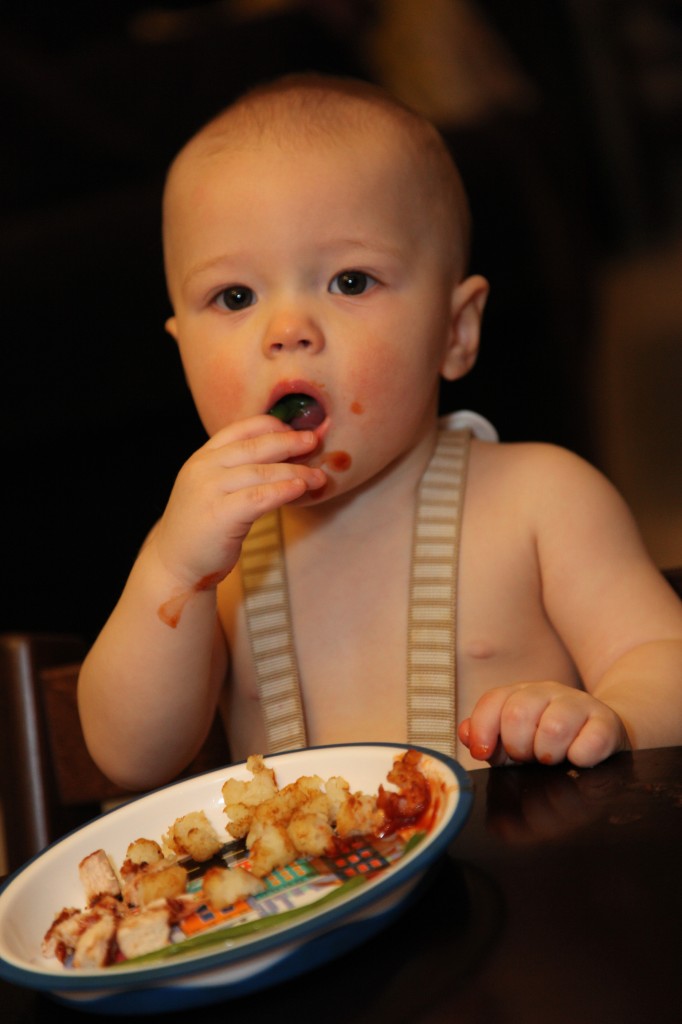 2 thoughts on “Running for Ketchup”