I have been practicing “Natural Infant Hygiene” (or “Elimination Communication“) for just over a month now with both Sophia and Cameron.  Sophia took to the idea very quickly and within a few days of just sitting on the toilet, on May 19th she peed in it and did it 3 times that day! and every day after….

Very soon after, she started hollering to let me know she had to pee or poop. She sometimes wears the same diaper for multiple hours.

Today for the first time, she gave the sign (yes, we have been practicing sign language too) for toilet and I took her to the toilet and she peed immediately.

Who would have thought the first sign language that one of the kids gave us would be toilet!  So proud of my smart little girl!

Cameron also pees and poos on the toilet, he just doesn’t let me know when he has got to go, not yet anyways.

Here is a picture of her on her toilet (diaper is covering her “lady parts”). 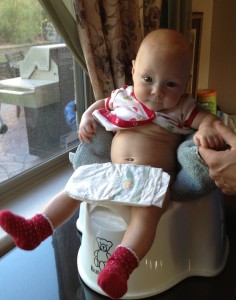 One response so far